With a Bird for a Heart - Chapter XV

(Note: I am changing the title of this story to "With a Bird for a Heart". There are too many stories out there that start with "The Girl") 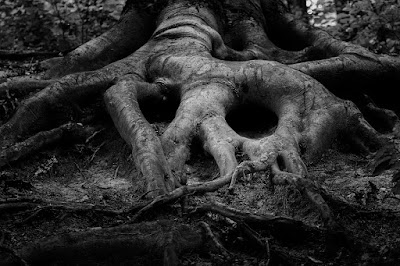 “Child.” said Kokaibel. “Do you think I am some hound that will follow because you command it?”

“I don’t care what you are.” said Tula, “You can follow or not. But you will not stop me from doing what I choose.”

“And what do you think you are doing?”
Tula scanned the horizon.  A dark wood stood between the edge of the hill and the burning city. Above the trees there was a glow that could have been mistaken for sunset spread into the sky. Billows of smoke drifted upward from the source of the light. A narrow path shrouded in shadows cut through the middle of the forest.

“I’m going there.” she said, pointing along the path.

“What could possibly be worse than you?” she asked.

“Oh, my dear. Precious little in this green world is worse than I.” Kokaibel said, “That said, being in my presence is not assurance of your protection.”

“Well,” he said, “for one, I have made no deal with you. I have offered, but thus far you have only requested a sample. I healed The Witch, but if you wish for more from me you must speak the words that unbind me. Release my power fully.”

“I recall what you told me.” Tula said to the demon. “I believe your words were, ‘Unleash me and I will be yours to serve’. Am I not mistaken?”

“Demon. I am young. I am weak and I am in desperate fear of what is to come.”

Kokaibel’s ebon form shimmered like the twinkling of stars in the night sky.

“But,” Tula continued, “if I unbind you then you are mine?”

“I’m just a simple girl. I have not travelled the world. Before this began I had never left the outskirts of Skar Lys. I am what they call a fishlass. My grandmother paid coin to a tutor so that I could read and do sums. She had often been cheated by men in the marketplace because she could do neither. She worked hard to ensure I would be as prepared for this world as she could make me.”

If Kokaibel had a nose he would have wrinkled it at her. “Tula Petek. Why are you wasting time with this pointless biography?”

“My point is that I am not as stupid as you think I am.”

She began to walk toward the wood. It stood nearly a hundred yards from the foot of the hill. The demon Kokaibel remained behind.

Tula turned to face him and walked backward with her arms outstretched.

“You said you would be mine to serve. You think you are clever, but if I give you what you want I know that you will be the master and I the servant.”

She turned back and trudged onward. Tula did not care if Kokaibel followed. She had gotten used to walking alone in the past several days. Her body had stopped feeling the ache of the road long ago. She had dropped her stick at some point in the swamp and only now noticed its absence. The first day on the road she ate nothing. Her grandmother told her the way to the Muck Witch and explained the rules for seeking her counsel. The old woman could not even give her provisions because help from another on the journey was forbidden. The second day she found a vineyard and ate only the fruit that had fallen. On the third day she had run out of fruit but was fortunate to find a lake full of fish. As the child of a fishing village she was able to snare a few even without a line or a net, but it took much of the day. She roasted her catch on the side of the road and slept in the grass before heading out in the morning. She ate the remainder of the fish just before she began walking again. Not long after she came upon the boy who had attempted to help her. That seemed so long ago.

Now the sky would be black if not for the glow of the burning city beyond the wood. Her stomach grumbled but there was no food coming any time soon.

“I sense your hunger.” said Kokaibel, his voice just behind her shoulder. “I could help. You cannot travel forever without sustenance.”

Without looking at him Tula said, “What do you want from me, demon? I have already said I will not grant you power over me.”

“Did you? And do I not already have power over you? I have your name.”

“What does that even mean? If having my name has given you power then what more do you seek? You have told me to unleash you, but you do not seem bound. If it was your plan to harm me you could do so now. I am alone. None could stop you. Yet here I stand in a dark and empty field with a demon following me...like a hound.”

“I see, my dear. Then it is finished. I shall leave you on your way.”

“What do you mean?” she asked.

“Clearly you have discovered my game.” Kokaibel said, “Your name gives me a degree of power over you, yes. Well, not so much power as...influence...but still. For me to truly be unleashed you must ask willingly for my power. You must invite me. But since you have no such desire...”

“I most certainly do not.”

“Well then, madam. Good evening to you. I wish you well on your journey through the forest. Say hello to the wolves for me.”

Tula could see the demon was attempting to manipulate her. After all, is that not what demons do best? But she was smarter than that.

“Then good evening to you, to, Kokaibel. May our paths never cross again.”

She walked into the wood.