The Girl With a Bird for a Heart - Chapter XIII 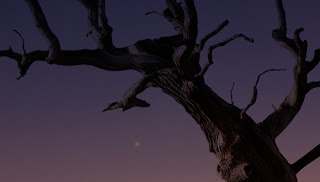 “Girl,” said The Muck Witch, “I beg you not to listen to this beast.”

Tula glanced back at the two of them, the broken woman on the ground with her hair full of smoke and the demon hovering over her like a person-shaped hole in the fabric of the world.

“I crackle with power, Tula Petek.” spoke Kokabiel in that dire voice of his, a voice that sounded like crying infants, and roaring flames and swarms of insects shaped into words. “Say the word and I will show you what I can do. Unleash me and I will be yours to serve.”

Tula saw the imploring eyes of The Witch and the dagger smile of the demon. She knew that such raw power was dangerous, but she needed it. The world literally burned around her and she was powerless. The end, whatever that meant was coming. If making a deal with this thing that should not be was what she needed to do to make things whole and right again would that not be worth the risk?

“Dear. Please. Understand.” said The Witch. “Kokabiel will never let you free once you accept his aid. He will grant your desires at first, but he will twist your wishes and eventually twist you until you are the servant.”

Tula turned back toward the burning city. The vermillion glow of the flames had lessened, but smoke still rose into the night sky. Tula had never been to Kudra Kai,  but heard of its wonders. Skara Lys was a much smaller city and she had lived near it her entire life. Whenever she had free time after market she would explore the streets and alleys and each time she would uncover some new sight. Kudra Kai was legendary for its splendor and now it was being destroyed. Every moment that passed a home or a shop was burned to the ground, forever gone. She would never see the beauty of this city, nor would anyone ever again unless a stop was put to this annihilation.

What power could this demon actually have? What could he even do? She decided to test him. Give Kokabiel a harmless task and see how it works.
“Kokabiel,” The Girl with a Bird for a Heart said, her voice cracking only a little, “I accept your offer of assistance. As a show of good faith I request that you heal my companion. Use your powers to make The Witch’s leg whole and right once more.”

The Witch, Maegda’s eyes and mouth opened wide in horror. Before she could speak the shadow-being was upon her.

“As you wish.” spoke the demon as he wrapped around The Witch like a cloak. Maegda tried to move but he enveloped her as she struggled. Tula stepped forward not knowing what to say or do. As she approached the shadow lifted.

The Muck Witch sat with her knees up and face down. The splint Tula had applied was nowhere to be seen.

“It is done.” spoke Kokabiel

Tula examined The Witch. The odd swelling was gone. Not even a red mark on her leg.
“Please rise!” said Tula joyously, “You are well!”

Maegda’s face lifted to meet Tula’s gaze. The Witch’s eyes narrowed and her nose drew up in disgust.

Tula stepped back at that look. “I had him heal, you.” she said meekly, “Your leg is mended. What harm can there be in that?”

“You ignorant.” said The Witch.

Kokabiel stood silently behind Maegda as she ranted, with that jagged smile somehow apparent on his unseeable face.

Tula felt a hot tear run down her face as The Witch berated her further.

“For years I held that demon in check. I held myself in check. Not once did I allow myself to accept his promises of power because I knew. I knew if I took that power for myself it would be my undoing. And now here I am. Tainted. Touched by his dark influence. His unholy might is flowing in my veins. I can feel it. My pain is gone. My body is healed, but I am as good as dead.”

“It was everything.” said The Witch, “You let him in. No. I let him in. But you opened the door. You do not understand. You don’t feel it! The seal has been broken. Now that I have tasted it there is no way I can resist taking more.”

“The city is burning!” Tula said, “The world is burning. We need to help whomever we can, not stand here. If this demon can help save lives then I don’t care what the cost is. My own life is already forfeit. I have seen what power he has. And down there in Kudra Kai there will be many who require our aid.”

Maegda stood gracefully. She turned away from Kokabiel and simply said, “No.”

Tula trudged down the hill.

“I’m going home.” said Maegda as she walked back toward the swamp. “Perhaps with distance and time I can resist the seeds this demon has planted. Believe me, Tula Patek. No good will come of trusting Kokabiel.”

The witch returned to the remains of her hut.

Tula got to the bottom of the hill and turned to look back up the slope.