The Girl With a Bird for a Heart - Chapter XII 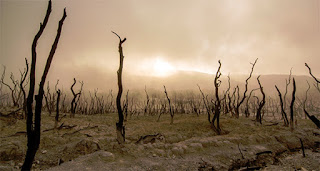 
“Did you not expect me to return?” Asked the towering man.

The boy opened his mouth but nothing came out. He spun around at the ebbing chaos. His notion of taking for himself a small portion of Enin’s wealth had literally gone up in smoke. He had nothing. For all the boy knew all of his contacts and acquaintances could be dead in the destruction delivered by the firestorm. Even the paksi had fled.

Enin surveyed the scene before him. “It is not easy for me.” He said with a face of stone. “Watching my home fade into dust. This sight does fill me with sorrow. But it is inevitable. All things must end.”

The boy croaked dryly, “You said that this was just the beginning. There is more to come?”

Enin smiled the smile of a man with a thousand secrets. “Yes, boy. Much more is coming. More than this world can handle.”

The boy stood and wiped soot away from his eyes.

“Come where? If the world is ending where can we go? And why should we bother? Won’t it end all the same?”

Enin whistled and from out of the shadows loped two familiar shapes. The paksi stepped forward.

“Be silent and ride with me for a while, boy.” The sorcerer said, “Neither of us should want for a companion in the times that are to come.”

He climbed upon the larger of the two birds and steadied himself by grasping the ruff of feathers around its neck. He nodded at the boy to do the same.

“Use the bridle only for guiding your mount, boy. If you need to right yourself while riding take hold of the plumage as I have.” Said Enin.

“Do so gently. Grasping the bridle will send confusing signals to the paksi and cause it to take the wrong course, perhaps even throw you.”

The main road out of Kudra Kai was flooded with people trying to escape the destruction caused by the short storm, but the birds were swift and maneuvered around the throng.

“The storm brought so much pain and ruin to the city.” Said the boy. “It only lasted a few minutes, but it destroyed homes and lives.”

“What worse thing could be coming?” The boy continued. “Where can these people run to? Where can we go? The forest and the marsh lands beyond? I can see black billows of smoke everywhere. Was there no part of the land untouched by this tempest?”

“I bid you to be silent boy. I am in no mood to answer pointless questions.” Said Enin.

“And I am in no mood to be told what to do.” Snapped the boy. “My whole life I’ve been wary of men and boys like you. Older, bigger, stronger. I’ve stayed out of the way. Tried to make myself small and not incur your wrath. I’ve been the servant, the victim. I’ve mostly hidden myself away from the likes of you who think they can command me and anyone who is younger or smaller than them. When I couldn’t hide I did as I was told just to keep myself safe. But now things are changing.”

Enin looked forward as the boy continued to unleash on him.

“No one is safe now. Not me, not you. Not the town guard, not the gangs. Not even Saiku Lin is safe. Not when the sky itself brings death to all. So I don’t need to heed you or anyone else. You cannot possibly be more of a threat than a sky full of fire.”

Enin glanced sideways at the boy but remained silent.

“So tell me, great sorcerer, if there is nowhere to run, then why run? Where are you going? Why should I follow? What kind of destruction is coming and what are we to do about it?”

Enin pulled his mount to a stop. The boy did the same. The sorcerer looked at him and said, “Past that forest, in the swamps there is a force more destructive than the firestorm. There is a power so great it will plunge my whole world into darkness forever. It waits for me. If you choose to run away from the end of the world then run, but you won’t go far. The end is coming sooner than you can imagine and when it happens it won’t matter if you are standing right here or a thousand leagues away. I am going to face that force head on.”

“Face it head on?” Asked the boy, “Then what? If this force is all you say what do you hope to achieve? How can you stop it from ending the world?”

The sorcerer’s head fell back and he let loose a barrage of laughter. “Boy,” he said, “I don’t intend to stop it.”

Enin shook the reign and his bird trotted on.