Duskworld - Chapters 29-30 A Quick Decision and Among the Ghosts 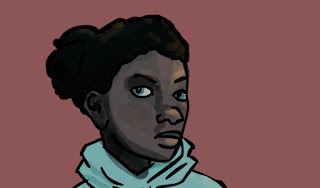 
Phel told them of his adventure in the Blackpatch with Tyson and what he had learned there.
“Can you guide me there, Phel?” asked Amara. “Can you take me to the old Nebcore?”
He nodded.
Meiki chimed in, “You aren’t going without me.”
“This is ridiculous," said Junko. “This is a serious mission, not a school field trip.”
“There’s no time to argue this," said Amara, “We need to get to this Blackpatch now”.


They boarded the skipper to find it in the process of producing an additional seat. It started as a white lump of gooey plastic protruding from the bulkhead and swiftly ballooned into a form identical to the other three. Meiki had stopped being amazed at the technology and just sat in the seat and waited for the safety restraints to activate. The slightly more hesitant Phel did the same.
Junko pushed Rashmi into the seat furthest from the hatch and sat herself down between the professor and Meiki. She touched Rashmi’s restraints and they became thicker and tighter.
“I’m not the deranged killer you think I am,” Rashmi Kapoor said. “I won’t tear through the straps and attack.”
“Feel lucky I didn’t gag you.” Junko snarled at her.
With Phel’s directions the skipper made the trip to the Blackpatch in a fraction of the time it had taken him to get to Newbright from there. Amara returned from the cockpit after the small vessel had glided to a stop.
She waved her hand and the walls of the skipper became translucent. Phel’s heart dropped and Meiki gasped even though she had witnessed the effect earlier.
They were hovering above a black and tangled forest of plastic and metal. Odd spires of random growth spread out in every direction. The landscape twisted into a bramble of ebon canyons and unnatural forms. There was movement too. Here and there dark shapes darted from one tower of bent and broken machinery to another.


“Ok, kids. This is where we part ways.” she said. “I’m going to dive into that forest and locate the Nebcore. I’ll issue the retraction and signal when I’m done.”
“Captain,” said Junko, “with all due respect, I should complete the mission. You’re too important to be risking your life like this.”
“I’ve already considered it, agent. I need you to monitor the situation from here. Keep Kapoor under wraps and keep these kids out of danger. If I fail to signal back within sixty minutes you are to leave the vicinity immediately.”
“But Captain, I’ve fought these ‘ghosts’. They can be beaten, but diving into their nest. That’s suicide.”
“You have your orders, Agent Sakai.”
Amara pulled off the trucker’s uniform she had been wearing over her foglet suit. Hers was coursed with red circuitry in a pattern that somehow looked more...formal. The pattern of the inlays was simpler than the other two and less jumbled. Meiki wondered if the suits served a symbolic as well as practical purpose.
Amara called up the mask portion of her outfit. It took the form of a heavy covering, like a helmet. The rest of the suit bulked up as well, like lightweight armor.
“I’m going to exit through the cockpit.” she said as she stepped behind the panel.
Black claws the size of swords crashed through the hull of the ship from all directions as if it were tin foil. It looked like a hand with too many fingers clasping the vessel and tearing it apart all at once.


Chapter Thirty
Among the Ghosts


The next several minutes were pure light and motion. Then blackness.