The Girl With a Bird for a Heart - Chapter X 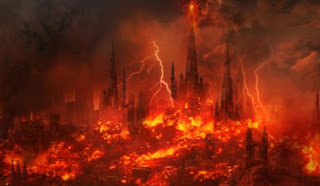 The boy had arrived back in Kudra Kai as the firestorm began. He wheeled his paksi driven cart into the stables and managed to unfasten the large birds before the building was engulfed in flames from above. He raced to the exit but saw only a panorama of infernal destruction. People and animals ran and screamed in chaotic fear.
The panicked birds fled the stables, nearly knocking the boy to the ground.

The boy dashed back inside and flung open the cellar door. Several feet below ground he hunkered for what felt like hours. The explosive blasts subsided but he remained among the barrels of grain and cheap wine. From above he heard cries of pain and terror. He cried until his eyes were dry. He collapsed on the floor and prayed to whatever gods may have listened.

The boy had no family. He had no friends. Born to the streets, he’d been alone as long as he could remember. Just one in a sea of urchins on the streets of the greatest and most terrible city in the world he had become accustomed to taking care of himself. He ran with some of the gangs from time to time, learning different schemes and tricks of survival, but he never stayed with any long enough to be fully accepted. When Saiku Lin first offered him the job of smuggling Enin into the feast hall the boy was wary. The name Enin had only ever been spoken in fretful whispers by those he knew. He was a warlock, a doctor, a killer, a charlatan, and a man of great wealth and power. Those who got too close to Enin were known to suffer for it.

When the boy learned that he would be taking Enin away from the city he grew more intrigued. He would have to meet with the man and gain his trust according to Lin. Enin did not allow himself to be vulnerable to any that may use it against him. The boy spent several days with the sorcerer and saw firsthand what great wealth could buy. In Enin’s chambers the boy was fed, clothed, and allowed to sleep in an actual cot. He was put in charge of Enin’s stable and given a key to the man’s home. Several times the boy was left alone. He could easily have taken anything he wanted from the man. Gold and expensive items were strewn about Enin’s chambers as if they held no value.

The boy took nothing save that which was offered to him. He took caution to not even look too long at the accouterment of his master’s home for fear of bringing suspicion upon himself. A single candlestick from that house was worth more than the boy had seen in his life.

He planned to return to the house after delivering Enin, use the key to enter and fill the cart with as much as he could fit. Then the boy would leave Kudra Kai forever. He was not sure where he would have gone. Perhaps Skara Lys or even Karas. The further the better, he figured. He could set up a small shop somewhere and sell the curios he’d stolen. Perhaps become a fat and rich merchant in time.

Neither Saiku Lin nor Enin gave any indication of when the sorcerer would return if ever. When the boy asked what he should do with the cart and Enin’s magnificent paksi the man did not seem to care.
“Return them to the stable, I suppose.” Enin had said as if he would never need them again.

The boy knew that the man was insane. Wanting to crash a noble wedding in such a bizarre manner was clear evidence of that. He decided that whatever Enin meant to do was none of his business. He would do his job and return to the stables as ordered. If Enin ever returned to his home he would probably not even notice a small portion of his riches missing. By the time he did the boy would be hundreds of miles away.

The boy never got to enact his theft, of course. The moment he pulled into the stable the sky exploded.

Now here he was cowering in a basement.

He wondered if it would be safe to venture out. The muffled sounds of those above trying to escape the madness raining upon them lessened.

The boy crept over to the cellar stairs. He was unsure of what to do next. The paksi had run off so swiftly he could probably never find them, assuming they weren’t consumed in flames.

He considered for a moment that this could be punishment from the gods for his deceitful intentions. The gods had never seemed to take notice of him before, though. This firestorm was something else. It was something bigger than the boy could comprehend.

The boy gazed up at the cellar door, afraid of what may be on the other side. He couldn’t stay down below forever, of course. What choice did he have but to open the door?

The room had grown noticeably warmer. There was a crackling noise from beyond the door. His eyes grew wide and every nerve in his body tingled. The stable must have caught fire. There would be no escaping now. He’d trapped himself.

Tears streamed down the boy’s face as an orange glow emanated from behind the door. It outlined the frame of the wood sharply. In a heartbeat the entire portal to the world above bathed him in angry light.

He heard a loud crack as the slats that made up the door burst down and fell into the room in a clatter of smoke and flame.

At the top of the stairs was now an open hole and beyond it was a darkness broken by a flickering glow.

The burning slats had fallen upon the wooden stairs. Soon they would be engulfed in flames.

More frightened of being trapped than of being burned the boy ran up the stairs through the fire.

All that remained of the stables was a dense cloud of smoke. The boy raced choking and crying through the smoke in a blind frenzy.

He fell to the ground some distance outside where the stables had stood, gasping for air. When he could see again the world around him was mostly black. The wrath of the gods- if that’s what it was- had struck just before nightfall. Enin’s house became a pile of cinder before the boy’s eyes. All around people were running with buckets of water trying to save their own homes and businesses. The boy sat by the ash-filled streets of Kudra Kai in shock.

“The world is ending.” he spoke out loud to himself.

“No.” came a voice from behind him. “This is just the beginning of the end.”

The boy turned to see Enin.