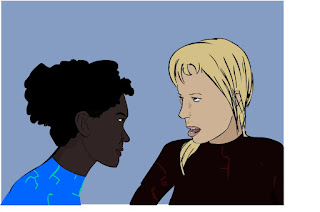 
“When I was in charge of Prathama,” said Marie, “I was overly ambitious. I assumed we could elevate humans to a state similar to what they had on Earth. Beyond it even. I made the mistake of assuming they would always make wise decisions. In that I was wrong.”
Charlie did not even look at her as she continued.
“After Charlie, Tyson, and the other stewards decided it best to start smaller, individual settlements I took the survivors with me and began construction of Newbright. Without a working connection to the Nebula we couldn’t contact earth for quite some time. “
“Slowly we rebuilt. I allowed the people to develop new technologies on their own. I didn’t even have to ban them from messing with sentient nanobots. They had been burned and now were shy. In less than sixty years they had a flourishing city and recently have even reconstructed the Nebcore within this library. We have begun sharing our knowledge with the rest of Naya. All the settlements had access to our library and our advancements. All but one.”
“I needed to protect my people from your corruptive influence,” said Charlie.
“You kept them stagnant. The rest of the planet advanced while the people of Gates were in a technological state barely past that of the twentieth century.”
“They had all they needed.”
Marie went on, “Humans need to branch out and grow. On their own. We are caretakers, not rulers. In the end they decide where their desires take them. I was mistaken to give them so much so quickly. But they continue to grow and learn under my stewardship. We are going to open communications with the homeworlds. The people of Naya are ready to enter the galactic community.”
“You’re ruining everything.” Charlie said to her, “My people are happy as they are. A simple life is all they want.”
“Not all of us," said Phel, “Not Meiki.”
“Who is Meiki?” asked Marie.
“She is one of Professor Darwin’s pupils," said Tyson, “His star pupil perhaps.”
“She’s my friend.” Phel snapped, “She ran off or got kidnapped by that Rashmi lady. Here you are arguing about the past when there are humans running around your city planning who knows what.”
“You know about Rashmi Kapoor?” Marie asked Phel, “How is this?”


“What are you saying?” Meiki held her hand to her face. “Eternal life?  What does that even mean?”
“The process is called ‘chaining’," said Amara. “It’s not literal, though. The Catena developed the system originally as a means of travel. Teleportation.”
“Teleportation?  Like in old science fiction shows?”  Meiki had seen them all.
“Sort of like that, yes.” Amara continued, “The idea was to make a quantum-level scan of a being and duplicate them in another location while destroying the original.”
“That’s not a new idea," said Meiki, “I must have watched a  million shows that have it. But it always messes my head up to think about it. If I get blasted to bits and put together somewhere else, is that even really me?”
“That is the question, isn’t it?” said Amara, “Philosophers and ethicists railed against the very notion for decades and it has never been implemented to any large degree, primarily because of those reservations. The argument over the continuity of consciousness has never been resolved in a satisfying way.”
“What does this have to do with chains?”
“Well,” Amara said, “the ethics of teleportation prevented humanity from ever pursuing it as a means of travel. But the basic principle of quantum duplication of an individual gave us an even greater power- immortality.”
Meiki’s face lit up. She had read and watched lots of stories that involved the idea but she had never considered it from that angle before.
“So,” she said, “you people can make duplicates of anyone. Like a perfect clone?  So if you die there’s a copy of you rarin’ to go?  Is that what you’re telling me?”
“Well, it’s more than just a clone. The Catena project involves a frequently updated database of the quantum state of every particle within every person in the system. That’s approximately twenty-five billion people. Every day they are scanned and that information is stored. If a calamity should befall a person they can instantly be restored to their most recent record. We’ve already nearly eliminated the aging process, but now almost every human being possesses a lifespan that is effectively infinite. The system retains all previous backups as well. That’s why it’s called being in “chains”. Each stored version of an individual is connected like links in a chain.”
“Lady,” said Meiki, “I have had my world turned upside down more times than I can count in the past twenty-four hours. You are gonna have to slow it down a little.”
“I’m sorry, Meiki. I know this is a lot to swallow. But you need to understand what’s at stake here. Since the Emergence Era mankind has spread to the stars. We are a vast and varied race, but our numbers are less than a third of what they were when we started to colonize other worlds. As technology expanded the length of our lives, the desire to reproduce became less of a driving force for the human species. We have begun to focus on pursuits of artistry and enlightenment. But we are still biological machines with all of the weaknesses that brings.”
“You mean you still can get sick, or get hurt, and die?”
“Yes. Also we are spread more and more thinly throughout the galaxy. As far as I know your colony is the last bastion of mankind living out standard natural life spans. You’re the last people not in chains.”
“And that’s why you’re here? To gift us with immortality?”
“Not as such, no. Perhaps that will occur. It’s not my place to decide. We’re here to stop Rashmi Kapoor.”
I wondered when we would get back to her, thought Meiki.
“Where does she fit into all of this?” she asked Amara, “Why does she want to get into the Nebcore?”
“She told you she wanted to send a message, yes?”
Meiki nodded.
Amara continued, “That’s not entirely false. But by message Miss Kapoor really meant a virus. The Neb is a highly protected network. It is an ansible system that facilitates communication instantaneously between all the worlds of humanity.”
“The Neb is considered virtually unhackable as it uses constantly shifting fractal key-codes to prevent breaches. Most of those defenses have been updated repeatedly over the past few centuries. But your “lost colony” has escaped such upgrades.”
“Oh,” said Meiki, “that’s it!  She can’t access the system anywhere but here...because our Nebcore is...behind the times.”
“Precisely.”
“What does this virus do?”
“It will eat away at the Catena system- deleting all backups and potentially disable the ability to scan people in the future. Rashmi would effectively be sentencing every person in the universe to death.”
“Why?”
“Rashmi Kapoor is a member of an extreme political group. They are people who believe that a single lifespan is all humans should ever have. It was all well and good when they boycotted the Catena and refused to allow further back-ups of themselves to be made. But they wish to impose their philosophy on all of humanity.”
“But Rashmi is nice.” Meiki said, “How do I know you aren’t full of it?  You could be trying to play me?  Ninja-cop over there broke my ribs!”
“Agent Sakai has been over zealous.”  Amara said, “She will be reprimanded.”
Junko made a rude face behind the Captain’s back.
“So,” Meiki said, “what’s the plan?  We just dive bomb the most beautiful building on the planet and capture my only friend?”
“You will stay here.” Junko finally spoke, “The Captain and I will complete our mission.”
Amara shot Junko a look and she closed her mouth up tighter than a mummy’s.
“Agent Sakai is correct. You will remain aboard the skipper until we decide what to do with you. We will take care of Kapoor. We have been in secret communication with Marie, the city’s steward.  She is expecting us.”