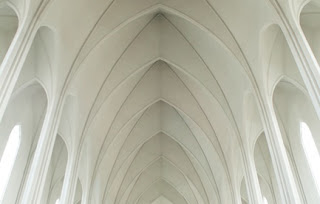 Meiki had never been the type to sit around idly when there was something to be done. As soon as the agents had made it out the hatch of the ship she slipped out of her seatbelt and sneaked behind the frosted panel to where she expected to see a control deck of some sort.
She found an empty cabin. Nearly identical to the one she had exited except there were no seats.
What is this?  she thought. How the heck do they fly this thing?
The foreign tech seemed so...foreign. No controls to fiddle with, no passwords or wires. It looked like it all ran by intuition. She called up the mask with her mind. Perhaps the sensors could show her something that she couldn’t see naturally.
Of course!  Meiki had an epiphany, It’s telepathically-controlled!  Just like the suit!
She stood in the room silently for a moment with her eyes closed. Think!
Ship?  Can you hear me?  This is stupid.
Nothing happened.
Ship?  I need you to move!  Please. My friend’s life is at stake here!
All remained still.
If only Phel or Charlie could see me now. What a seed I am. Trying to control a spaceship with my mind. What a dumb rube. I must look like a caveman trying to drive a car. I feel so stupid. Even if I could move this thing where would I take it?  There’s no viewport. No cameras even. I could crash it into the nearest building for all I know!  If only I could see.
She opened her eyes and nearly died of fright at what she saw.

“How do you know about Rashmi Kapoor?” Tyson asked Marie.
“Madame Curie been helping us track her.” came a voice from the doorway.
Phel turned to see the blond woman. Behind her looked to be another woman in one of those suits, her face covered in a mask.
“That’s the lady who attacked us! You’re on her side?” Phel said, looking at Marie with his mouth agape.
“I’m only here to capture my fugitive," said Amara, “I told you before that I have no interest in your local politics.”
“I knew that chick was trouble," said Phel, “Where’s Meiki?  Did Rashmi kidnap her?”
“Your friend is safe. But I suspect Professor Kapoor has infiltrated this building. Doctor Curie, show me the way to the Nebcore.”
Marie nodded and led the way followed by Amara and her counterpart. Phel ran swiftly behind them with Tyson and Charlie trailing.
Marie took them to a long hall with a skylight above.
“The Nebcore is on the other side of the illusion room.” she said.
“Illusion room?” asked Phel.
“Yes. It uses haptic holograms to perfectly recreate an old Earth forest. It is one of our latest creations. It’s just a prototype. Eventually we will turn the entire lobby of the library into one.”
“We can discuss the local attractions later,” snarled Junko from under her mask.
Charlie and Tyson caught up with them.
“Phelliam,” Charlie said, “this is no place for you. I insist you return to the office immediately.”
Phel ignored him and kept walking.
Amara approached the door and said, “Your android is right. Allow us to handle it from here.”
The two agents opened the door into a small antechamber. Across the room stood another door. This one looked large and reinforced.
Marie stepped forward, “This should not have been locked.”
Charlie and Tyson stood beside her while Phel held back in the hallway. Something about that door made him feel uneasy.
Don’t open it, he thought. But his voice caught in his throat and the words wouldn’t come out.
“My memory must be failing. I’m certain I left this door open.” Marie said as she began to type the passcode.
“No!” said Amara, “I’m detecting a-”
Before she could finish a concussive blast engulfed the room as a bomb on the other side of the door detonated.

Chapter Twenty Seven
Into the Flames


Meiki stood floating hundreds of feet in the air with no support. Or so it appeared. Beneath her she could see the library- a beautiful alabaster flower spread out over the plaza.
Part of the structure was just a few feet below her. When she didn’t fall Meiki realized that she actually remained on the skipper. It just had somehow become transparent.
It heard me! She thought. This vessel somehow heard me and allowed me to control it!
A little anyway.
Maybe she didn’t have enough clearance to make it move, but at least she could roll down the windows, so to speak. Meiki looked at the citizens below and felt like a superhero once more.
She was flying, sort of.
No one seemed to notice her hovering above them. They had said the ship had kind of cloaking. Perhaps whatever technique it used to do so protected the vessel and it’s contents even when it was made transparent from the inside.
Now I just have to get down...then what?
The hatch on the side was now invisible. Meiki closed her eyes and pictured where it had been. When she opened them again it had returned.
This is almost too easy.
She placed her hand over the door and willed it to open. It silently granted her wish.
A cool breeze hit her face. It felt refreshing but also reminded Meiki how high up she was.
Part of the building jutted out just a few feet  from the hatch. Obviously the agents had gotten in that way. It would be just a short jump with a terrible fall if she missed.
Meiki had gotten comfortable in the alien suit. She had grown to trust that it would protect her.
She took a deep breath and leaped onto the top structure of the library.
As an edifice built more for aesthetics than function the roof curved in an organic manner. She slid down a leaf-like minaret that twisted into the main building. In seconds she stopped atop the building’s main canopy.
There she saw a skylight leading into a bright chamber. It was made of what Meiki assumed to be glass. A round hole large enough to fit a person had been made in it. There were no broken shards to be seen.
Meiki heard voices of individuals approaching beneath the skylight. She stood back so as not to be obvious and watched.
Charlie, Phel, Tyson, and a woman she did not know passed by in the large room below the skylight. They were talking about something.
“Phelliam, this is no place for you. I insist you return to the office..," said Charlie, but he trailed off before Meiki could hear it all.
What is he even doing here?  All of them?  AND PHEL! He’s all right!  I’ll kill him if I see him again. Then give him a hug...son of a...
An explosion came from the direction they had been walking.
Smoke and fire filled the chamber.
NO!
Meiki leapt into the room through the aperture in the glass. The suit gave her the grace of a panther and she could see almost clearly in spite of all the smoke around her.
She stood in the room she had spied from the roof.  It was a wide hall with walls painted blue and white. Statues of what appeared to be marble and lush works of art lined the walls. She didn’t have time to be impressed by the decor. At the end of the hall she saw a large door that had been blasted to pieces. Billows of smoke poured out of the room to which it led. Flaming bits of debris were scattered around the hall.
Phel sprawled on the floor in front of her with his hands over his ears. She touched his shoulder and he looked up at her in shock. His eyes widened at her masked visage and he scooted away.
“It’s me, Phel...Meiki!” she yelled but he didn’t seem to hear. She realized she still had the mask on and removed it. Smoke burned at her eyes. The look on Phel’s face shifted from fear to confusion.
“Meiki?” he said loudly. “Is that you? I can’t hear. A bomb went off! I’m deaf!”
Without the mask and its sight enhancing abilities Meiki could see little more than smoke. She reactivated it to see Tyson trip through the door. He walked strangely and his right arm dangled as if it were broken. He seemed to not see her as he stumbled to the other side of the hall.
“Charlie’s in there!” shouted Phel.


Meiki ran into the flaming room without a thought.