The Girl with a Bird for a Heart- Chapter VIII 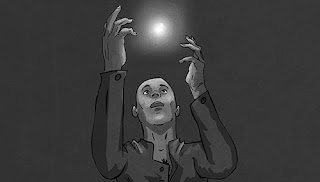 The light brushed against Enin’s fingertips. It had a physical presence. Waves of heat shot down his arm and into his chest. They engulfed his newfound heart  in a flame that did not consume. The light of indeterminate color flooded his eyes. The heat spread throughout his body like a fever.

“Stand.” came a voice from above him. The voice was indescribable, neither deep nor high and not loud nor soft.

Enin rose to his feet, expecting his head to meet the ceiling of the cave. It did not. He was a tall man even without his hat. As he stood he got the sense that the cave itself was much bigger than before, infinitely large.

The light in his eyes began to fade.

“Who are you?” Enin asked the voice.

“Close your eyes.” said the voice.

“Why?” asked Enin, but he did as told as if compelled. The light faded slowly to black.

“Who are you?” Enin asked once more.

“Open your eyes again.” was all the voice said.

Enin stood in a field of green. The bluest sky he’d ever seen floated above him. The meadow spanned about one hundred yards in every direction. Trees of a sort he’d not known since his boyhood lined the perimeter. The field teemed with life. Birds of many colors darted about and small creatures he took to be rabbits munched on the short grass by his feet.

Before him stood an elderly man. His back was bent and a profusion of deep lines covered his face. His eyes were watery and grey, but open and alert. He smiled a genuine smile.
“Welcome to my pasture.” said the man.

“Who are you?” Enin repeated.

“I’m...I don’t know...I’m just me.” Enin knew who he was. He knew his own name, his own history, yet somehow could not speak it. He felt as if he stood beside a plate of glass and his entire life before now were on the other side. He could witness it as if from afar but couldn’t touch.

“That is correct.” laughed the man. “You are just YOU. I have seen you. Dancing about the stage. Playing the role of demon and angel. Living a life that you think has been long. I have watched you cry and laugh and love and hate. You have made quite a spectacle of yourself.”

Enin looked more deeply at the man. He recognized the face.

“Yes, but not in the way that you mean.” said the man.

Enin looked again and said, “I am mistaken. It has been so long since I have seen his face. But I recognize you now. You are my teacher. The first teacher. You taught me to read when I was so small. You sent me down the path of knowledge. That path I have walked ever since.”

“I am that, but again not as you think.”

Again he regarded this wizened old man. Each time he glanced at him his face changed. He was the slavemaster of Kudra Kai then the Wizard of Hybourne. One moment he resembled the man with the apple cart- the first man Enin had ever killed. The next he wore the face of a Crystal Man who had aided Enin in his search for a potion that would extend his own life. Every teacher he’d ever known, every face of every person who had granted him knowledge was present here.

“This is simple trickery.” Enin said. “You are using basic magicks to fool me. I’ve lived among face changers in the Shadow City. I’ve slain skinwalkers in the forests of Grek. I’m not fooled by your pranks.”

“This is not a prank, young one.” said the man, “I am The Teacher. I am every teacher. When you look at me you see the face of every person from whom you have drawn inspiration. You see all teachers.”

“I am not young.” he said, staring into the blue.
“You are to me.” said The Teacher. “Your time on this world has been long by your standards, but I have watched you as well as countless seekers before you.”

“I have done it all.” said Enin. “I have spent more than ten lifetimes walking this world and now I am weary. I come here seeking to end it.”

“I can aid you in that.” said The Teacher, “But what I set in motion cannot be undone.”

Enin sat on the grass and wrapped his head in his hands. “Teacher,” he said, “I am spread thin. My bones should long since have been dust. Yet still I walk this world. I have seen all the joy and all the pain that mankind has to offer. I have been the cause of much of both. I wish only now to end it.”

“Do you not care how this action will affect the rest of those living in this world?”

“No.” said Enin, “If there is one thing I have seen in this world it is the wickedness in the hearts of all men. The scroll of Aina- Keeper of Breath showed me how to put a stop to this. I have done so much to get to this place. I have killed, tortured, so many have I harmed. But if I follow the path that I have set myself to. I can erase it. My own sins. The suffering I have wrought. All the blood, all the pain. It will be like lines erased from a slate.”

The Teacher looked up at the sky. It had turned grey as Enin spoke.

“Seven days.” Enin said, “That is what the scroll says. Seven days from the time that I ask. That is the time to undo the world. Tell me it is true.”

“It is.” said The teacher. Clouds formed above them- dark, heavy, and pendulous.

“I shall.” said The Teacher.