The Girl with a Bird for a Heart- Chapter IX 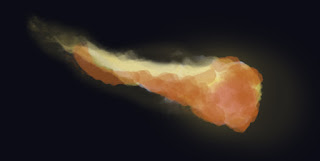 Tula tapped at the bars of the cage that held the bird.

“Does it hurt?” asked The Witch.

“Not anymore.” said Tula. “When it was happening the pain was more than I could bare. My vision turned black and the next thing I knew my grandmother was shaking me to awaken. The pain was gone then. I felt merely...empty.”

“Tula-” The Witch began, but was interrupted by a horrendous crashing noise outside of the hut.

The two women raced outside to see fire raining from the clouds. Crimson balls of flame with streaking yellow tails blasted through the sky and into the boggy ground with dreadful force and exploded in horrifying bursts all around them.

The Witch’s eyes grew wide as the hut in which they’d just been sitting ignited behind them. The swamp hens clucked and squealed frantically and ran in circles. The walls of the tiny structure burned quickly and plumes of black smoke billowed around it. From inside came several smaller explosions as the bottles and jars within burst from the heat or perhaps from some magical force within them.

More streaks dropped around them in a blazing torrent. From within the hut the smoke swirled and coalesced. It almost seemed to take a human-like shape.

“No.” gasped The Witch. “No. Not now. This can’t happen now!” She stood frozen and stared at the Cacobeast taking form inside her demolished home.

Tula grabbed her by the hand and pulled The Muck Witch into the dry forest on the edge of the bog. Gripping the older woman tight, Tula led her to the relative cover of the trees. Above them branches cracked apart in white-hot flares as the meteors fell. Splintered wood and searing fire flew by in every direction.

The pair ran forward until they came to a wall of trees ablaze. They turned left to find the path blocked by several fallen tree trunks that were blackened and burned by the destructive force that must have laid them low.

They turned back toward the swamp. A meteor hit land right behind them with concussive force and a noise like ten thousand thunderclaps. Tula and The Witch were thrown to the ground. All grew silent.
To Tula the world slowed as the blasts continued to fall around them soundlessly. She got to her knees. The Witch lay face down on the scorched ground with her leg bent strangely. Fire continued to rain. Her eyes filled with tears. If she had a heart it would have been beating like a hummingbird’s. Instead she had a bird and now The Bird spoke to her.

“What?” said Tula, “How are-” before she finished her question she realized that she could not hear her own voice. She could hear nothing but The Bird.

“No, time for questions, girl!” came the voice from her chest. “Move, move, move! That’s all there is to do.”

“But-” she mouthed silently then stopped. Trying to speak was obviously futile.

“Now!” shouted The Bird as another meteor struck dangerously close to them.

Tula grabbed The Witch by her arm and hefted her over one shoulder. The older woman came to and looked around.

“We must run!” said Tula, but she could not tell if The Witch heard.

The Muck Witch tried to move, but her leg was clearly broken. She fell onto Tula.

Somehow the girl found the strength to drag The Witch to the swamp.

They trudged on three good legs through knee deep water. The blasts of flame seemed to lessen as they went. In several minutes that felt like years they reached a small hill where the ground was drier. Tula slumped to the ground, exhausted. The fire had not spread to that spot and as she looked behind her it seemed as if the meteor shower had ceased. Slowly Tula regained her hearing.

The two women sat on the edge of the bog, surveying the destruction.

“Do you know how to set a broken leg?” The Witch asked matter of factly.

The Bird said nothing.