The Diary of Wartha Gormley - Hi, This Is Sam. 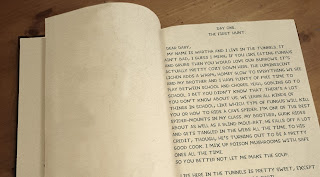 Or should I say, Dear Diary,

I don’t know if it’s cool for me to be writing here, but I found this book in the stairwell below my apartment building. The one with the boarded up door. It looks like someone’s diary, but there wasn’t anyone around. Why would someone throw it down the stairs like that? I don’t know how old it is. It looks like a real old-timey book, but it’s in pretty good shape. I mean, it looks like it’s been through the laundry once or twice, but the binding is holding together and the pages are made out of some real sturdy paper. Is it paper? I don’t know really. It’s thick and the ink has a little sheen to it, like the rainbow in an oil puddle.

If I find the owner I hope she doesn’t mind if I use it a little. I probably shouldn’t read it, though. That would be wrong, wouldn’t it? I won’t peek. I’ll just use a few pages. I’m sure Wartha won’t mind. This book is very thick. She probably won’t even notice a couple of sheets missing.

And no, I didn’t read it if that’s what you’re thinking. Her name was on the cover. That’s how I know it. I never heard of anyone named Wartha around here. I wonder if she goes to a different school.

Anyway. My name is Sam. I’m thirteen years old and life sucks. Not much more to say I guess. Well, I suppose I should come up with something, though. Otherwise I totally wasted a page of this girl’s diary. I assume she’s a girl. Wartha sounds like a girl’s name right? Of course most people can’t tell by my name if I’m a boy or a girl, so who the heck knows? Who the HELL knows? Diary’s are secret so it’s ok if I swear, right?

I’m just waiting for the school bus. I happened to glance down the stairs and saw a book. I’m not a thief. When I get to school I’ll ask around. Maybe someone knows a girl named Wartha and I can return it to her. I should probably tear these pages out then, huh? What was I thinking? She’ll probably be mad. Well, no sense stopping now. I might as well finish out the page I’m on.
There are some other kids here too. Not my friends, though. Liam and Maia are nice I guess, but they don’t really talk to me. Then there’s Jason. He’s not a bully. Not exactly. He just needles me. That’s what I call it. He doesn’t actually hit me, but he makes remarks and sometimes pokes at me when he thinks I’m not looking. I know it’s him. Like one time in assembly he kept poking the back of my neck with a pencil and whispering rude words under his breath. I turned around but he was sitting with a bunch of his cronies (vocabulary word!). They all acted like they didn’t know why I was looking at them even though I’m sure they saw him bugging me. But I can’t really prove anything, can I?

Look here, diary. I’m not saying I hate Jason and I’m not some lonely loser looking for a friend. I just want to be left alone already. Is that too much to ask? Shit (swears!). Here he comes now. He’s going to ask me why I have a book that isn’t for school probably. I’m going to put you in my backpack, diary. Don’t get scared in there. That green thing is just a peanut-butter and jelly sandwich I keep forgetting to throw away.

Diary. Hi. Glad you’re still here. I’m in study hall right now so I can get away with writing in you. Does it tickle? Just kidding. I know you’re an inanimate object. This is my sense of humor. You’re going to have to get used to it if you’re going to be my diary.

I was going to ask around about Wartha, I swear, but the problem is I don’t really have any friends. I mean, don’t you think it would be weird if I randomly spoke to Paul Baxter or Emily Young out of the blue asking about some girl they’ve probably never heard of? Besides, it’s hard for me, diary. I have trouble talking to other kids. Like when Kyanna Newman said hi to me in gym class yesterday. I looked at her and opened my mouth but all that came out was a dry little frog noise. I just wasn’t ready. I can speak fine when I know I have to, like if the teacher asks a question or if I’m talking to my cousin, Dale. But if someone just pounces on me unaware like that I freeze up. You probably wouldn’t understand. I’m sure that being shy and unable to talk to people isn’t a problem that inanimate piles of paper have to worry about.

Do you miss your old owner, diary? Wartha Gormley is an odd name. Is she a White girl or is she Black like me? Or maybe she’s Asian or Latino or some other race I never heard of. What does she look like, I wonder. Did she grow up around here or was she just passing through? Would we get along if we met? I really don’t think so. I don’t usually get along with other kids. They think I’m too weird or too quiet. Except sometimes they think I’m too boring or too loud too. I can’t win.

Maybe I should read a little of her pages from you, diary. I don’t want to snoop, but if I don’t at least try to learn a little about her so I can return you to her then doesn’t that make me a thief?
Ok. I’m just going to read the first page of “The Diary of Wartha Gormley”. How personal can the first page be, anyway? Probably just a little about herself, like maybe her address or something. That will make it easier to find her. It’s the right thing to do.

Holy wow. Diary. Why didn’t you tell me? Wartha must be a writer, right? I mean this whole book is just a story. All day I was worried that I had someone’s personal journal on my hands and it turns out that Wartha or whoever is just made up. Right?

I’m going to read more to make certain, but I have to go to Language Arts. Mister Roshem doesn’t like it when we read books in his class. That’s irony, by the way. It’s a vocabulary word.

Be back soon, diary.

This is very cool. The style obviously is what I find stands out most immediately.

Thanks! I'm glad you like it. Did you just read this chapter? There are several others.