The Diary of Wartha Gormley - Day in the City 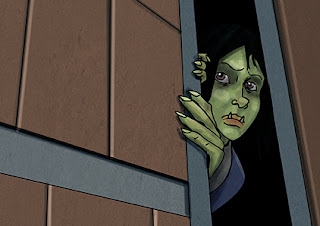 Day in the City


Diary. It’s been awhile again. I’m sorry. I feel a little better now. I had started on some other entries, but I tore them out. Sorry about the ripped pages. I threw them in the river. Maybe someone will find them some day and wonder. They were mostly bad poetry and me feeling sorry for myself.


I miss Drucilla something awful, Diary, but it’s ok. My journey is all that matters now. I’m going to kill The Sun. It’s what Dru would have wanted.

I don’t know how many days it’s been since I last wrote a serious update. I passed through some more hue-men villages. Their false caves are everywhere in this part of the land. I’ve been going on foot so it takes a lot longer to get anywhere. I climbed the tallest tree I could find and looked out to the edge of the world. It never seems to get any closer. Is the Upworld messing with me? Does it just grow bigger and bigger the more I march? Will I ever get to the place where The Sun makes its nest?


I’ve come too far to turn back now. I don’t think I could even make it back to the tunnels if I tried. This hue-men world is so big and wide. I don’t know the way back to the cave I entered it through. I should have made a dang map. What was I thinking.


Diary. You won’t believe what I saw today. A whole dang city of hue-men. It’s massive! The caves- I don’t even think that’s the right word for them...more like towering spires of metal and stone- they reach toward the sky. I can’t believe Updwellers built all of this. I’m still in the woods near the city. I followed the river all the way here. It seems to go right through the heart of it.


I’m going to wait until nightfall then see if I can make my way through it. Gashwhisker alone knows if there’s any way to get around this thing.


Diary, the hue-men never seem to sleep here. I have to be very careful here. I don’t know how they’ll react if one of them sees me. The Updwellers have some messed up ideas about goblinkind if the story that Miri told is any indication. I’m laying low, but it ain’t easy. The river cuts right through this city and the forest around it has thinned out to nothing. I’m sitting behind the last tree before a huge clearing. Around me are countless Updweller caves. They stand up straight and tall. Most of them are blocky and rectangular. Some have artistic flourishes and sculptures around them, but most are pretty plain. It’s a little unnerving, I tell you. Caves are supposed to go down, not up. Updwellers are so backwards.


Paths crisscross the city. Some of them are for walking on but most are dedicated to those big metal hue-men carts. Nonstop they dart around the place. I guess that’s just how Updwellers get about. Must be nice.


It’s really dark out now and I don’t see too many carts about. I think the city is mostly asleep finally. I’m going to head out and see how far I can get into this place. Maybe I can make it to the other side and back into a forest or maybe even some proper caves (not hue-men caves) before The Sun comes around again. If I don’t make it then I’ll find a place to hunker down until it gets dark again.


I’m deep in the heart of the hue-men city. It’s like a maze of towers built upon towers that seems to go on forever. I’ve never been to the goblin city, Witherburg, but I’ve read about it and even seen drawings. It’s not like this. Everything in Witherburg is carved out of the stone of the tunnels. It sits just beside the pit of the Downlow. Have I ever told you about the Downlow, Diary? It’s an infinite pit filled with all sorts of monsters and ancient civilizations. The only goblin who’s ever gone there and returned is Gashwhisker. That’s how he got to be the Dark Hob, watcher of us all. Gashwhisker was the only goblin brave enough to face the fearsome spirits and eldritch terrors of the Downlow. But even Gashwhisker has never been to the Upworld. There are no tales of him visiting a hue-men city.


Look at me. Comparing myself to the Dark Hob. If Ma read this she’d scold me. I don’t mean any disrespect, Gashwhisker (I know you can read on account of you see everything). I’m just writing the facts as I see them.


-----
Diary. I heard something. I found a place to hide- I think. It’s a hue-men carved stair that goes down to a door alongside one of the cave towers. The door is boarded up so I don’t think hue-men are likely to be coming down here. I just hope that they blocked it off to keep beings out and not to keep something terrible in.


I’m going to rest. The sky is turning purple. That means soon The Sun will be back and the Updwellers will start moving about. I’ll just hide out here a bit.


-----
The noise is unbearable, Diary. I can’t sleep. There must be hundreds or thousands of hue-men stomping and shouting up there in the canyons between their tower caves. I pulled my hood over my face but I can still hear it. And those carts make a load of noise too. They roar and hum and sometimes make a strange noise like a snorting honkerbeast.


Diary. I think someone is coming. Down the steps. I’ll try to hide in the corner of this hole, but I don’t think there is any way to avoid getting caught. I got to put you away for now, ok? Don’t be scared, Diary.