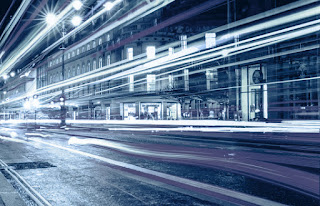 Phel and Tyson found the road as the weak Naya sun began to rise.
“Where are we headed now?” Phel asked as they walked.
“To Sagan. It is not much farther now. There I will leave you as originally intended then I will continue on to Newbright.”
“No.”
“I beg your pardon?” said Tyson.
“No. I’m not going to wait while you and Charlie and Meiki are off fighting alien invaders who want to put us all in chains or whatever. I’m coming along too.
“I cannot allow a child to-”
“I ain’t a child. I’ve been nearly on my own for three years. Meiki’s been totally on her own. She doesn’t even visit her own mom. Isn’t that the whole point? You androids raise us up away from our parents so we can be self-sufficient. So we can start new towns and cities, spread all over the planet?  Ain’t that it?  Well, mission accomplished. We grew up quick and now here we are making adult decisions. I’m coming with you to help Charlie and to help Meiki. Or I’ll go on my own without you if need be. But there’s no way I’m sitting around wondering what I should have done...Sir.”
The pair finished their journey to Sagan in silence.
Phel expected Tyson to walk around Sagan like he owned the place, but when they got there the situation was actually a bit awkward. They were greeted just outside town at a truck yard by a man named Davino. He spoke to Tyson as if he were his equal. This shocked Phel even though he had just told the android off himself.
After a brief explanation that the truck had broken down Tyson procured a car similar to Charlie’s lemon under the guise of taking it back to the truck with the tools he needed to fix it. Davino didn’t think to ask why the necessary tools weren’t on the truck to begin with.
When they got to the main road they turned in the opposite direction of where they told Dav the truck broke down and zipped to Newbright. Phel sat and decompressed the events of the past evening as they drove. They made it to the bridge that took them to the center of the city in less than two hours.
“How do you even know this is where that lady took Charlie?” asked Phel.
“We have GPS, Phelliam. I know where Professor Darwin is at all times.”
“How far then?”
“He’s close...just a few blocks from here. It’s not a particularly large city.”
“It’s the only city," said Phel.
They sped through lazy afternoon traffic of bikes and the occasional car until they came to an alley. At the far end Phel saw the truck. He jumped out of the car before Tyson had the chance to bring it to a complete halt.
“Charlie!” he shouted as he ran toward the truck. Tyson called out to him too late. The woman stepped out from behind the truck and fired her weapon. The blast ignored Phel and struck Tyson who instantly fell to the ground.
Phel looked at her in horror and shock as she strode confidently past him toward Tyson.
“You’re violating the rules.” Tyson said to her from his position flat on the ground.
She stood over him and said, “I am here for one thing. I commandeered your transport because it suited my needs. I will not interfere in your petty local disputes. Your friend is inside the truck, unharmed. When I leave both you and he will regain your mobility.”
The woman opened the back of the truck. Charlie lied prone inside. Some kind of vessel loomed behind him.
“Be a dear,” she said to Phel who stood dumbstruck, “Drag your androids out of the way so that I can take off. I’d prefer not to harm them...or you.”
She jumped into the truck and slipped swiftly into the compact ship.
Phel was dumbstruck but wasted no time pulling Charlie and Tyson down a side alley and out of the way.
The ship began to hum and hovered inside the truck. It slowly floated until it was in the open and began to ascend. As it rose above the buildings it faded and became transparent until Phel could no longer detect it at all.
The woman had not lied. As soon as she left Charlie and Tyson both stood up and dusted themselves off.
“What was that all about?” demanded Phel. It was not like him to question his elders, but at this point he had lost himself. Phel had been through too much. Alien agents, robot hive-minds. All he had ever wanted was to be a simple farm technician or maintenance worker. He would get Ker to notice him, marry her and have children that he would teach to play the banjo. Was that too much to ask?
But no. Thanks to Meiki he’d been dragged so far out of his element that he felt as if drowning in new experience. The authority figures he’d always followed without question were giving no real instruction and dragging him along in their mysterious plans. He would have no more of it without answers.
“Who is that lady and why does she keep on shooting at us?  And what do you mean she broke the rules?  What rules?”
Charlie ignored Phel and said to Tyson, “We continue as planned, then?  To see Marie?”
“Yes,” said Tyson as he placed his hand on Phel’s shoulder, “and Mister Glebe is coming with us.”
Charlie remained silent as they walked.
“Where are we even go- never mind," said Phel. He realized halfway through the sentence that they must be connected to this Marie through GPS as well.

Running toward the Barnum River was the most exhilarating thing Meiki had ever experienced. With Rashmi’s tech she could run faster than she could bike. As fast as a car, probably, she thought. There were virtually no motorized vehicles within the city, though. She picked up quite a bit of attention as the city folk saw her zoom by. That was part of the plan. No covert skills were needed for this mission. Distraction was essential.
When she got to the river, Meiki turned. The river circled around the entire city like a moat. She ran at top speed for half an hour without getting tired. She had made it halfway around the perimeter of Newbright. There was no sign of Junko. Meiki began to question this plan.
She stopped to look around her. Down the street behind her she saw a gathering of some sort, people walking and running toward her. Some were on bikes and closing in.
Rashmi had given her a crash course in the suit’s properties. It could respond to neural oscillations of the wearer. Essentially, whoever donned the suit could train it to perform certain tasks just by thinking of them. She hadn’t taken the time to learn much, but she had figured out how to make the suit cover her face like a mask as Junko did. She also knew how to activate its optic enhancers, or the zoom lens just by conjuring a picture in her mind.
Still a few blocks off, but gaining on her the crowd did not look threatening. It appeared to be a group of people forming to witness a spectacle. She must have attracted more attention than anticipated. Meiki couldn’t determine if this was good or bad, but decided to continue moving.
At the next block she saw another group coming perpendicular toward her and another from straight ahead. They flanked her. Of course, she thought, word is spreading about the amazing fast jogger.
She wanted to remain mobile and decided that being mobbed by gawkers would hinder that. Meiki determined that the crowd coming down the cross street was the smallest and ran straight toward it.
In a flash she leapt in front of them. There were only a few dozen people, mostly young. They were carrying books in camera mode and other devices of similar nature. Some of them were talking and uploading video of her. Others were gabbing excitedly into their devices about this new wonder in a city of wonder. This must be what it was like to be a superhero, thought Meiki, like in the old Earth movies. Everyone looking and pointing while you effortlessly performed amazing stunts. She was just running, of course, but at impossible speeds.
Before that concept ran its course through her mind she was among the crowd. Most of them stepped back from the masked girl with strange powers. She could weave between them like the wind through branches. As she sped past the mob, Meiki took one last glance at her adoring public.
The motorbike hit her before she saw it.