The Girl with a Bird for a Heart - Chapter VII 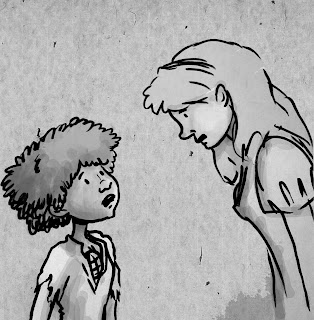 “I’ve told you my entire story. All that I know and understand of it. My grandmother found me lying in an alley where the man had left me. She saw the cage that took the place of my heart and knew right away that I had to come to you. She told me the rules that I must follow to seek your aid.”

“Your grandmother gave good counsel, girl.” said the Witch.
“So you can help me? You can restore my heart like you did my voice? Make me whole again?”

“But, Muck Witch, please! I beg. I will repay you any way I can. I have no coin but I will work for you! I can cook, and tend to your animals!”

“I do not need those services,” the Witch began, “but more importantly I cannot fix this curse. This wicked man who has stolen what is yours- you do not know where to find him. You do not know where he has absconded with the core of you. Even if you could find him the only way to repair the damage done is if he willingly returns your heart.”

“No. You have lost something but you have not lost yourself.” said the Witch. “Even though you are changed by this ordeal, you still have your life. That is more than many get to keep after having the heart of them removed.”

“My life? What good is that? The wicked man took my life as well as my heart. Or he will soon enough. He claims the world will soon end. I with it. You as well I suppose.”

“That does concern me.” said the Witch as she flipped her braided hair over one shoulder. “The world happens to be where I make my home, so ending it would cause me great distress.”

“What does that even mean really?” asked Tula. “How does one end the world? And what does my heart have to do with it all?”

The Witch gathered all of the spilled bottles and replaced them inside her hut.

“Come girl.” she said, “We will put tea on and I will tell you a story about the making and the breaking of the world.”

The Witch began to boil water in the iron pot. She procured a tin box from the massive collection of junk in her hut along with a small teapot. The box was full of strongly aromatic tea leaves which the woman put into the pot.

“Which story have you been told?” she asked Tula.

“About the beginning.” said the Witch as she poured hot water into the teapot. What tale are you told about the origin of the world and all the things in it? There are many stories and I am asking which is yours.”

“I see.” said Tula. “I suppose that the story I have been told the most is that of Maj the Shaper. He stood in the firmament surrounded by void. I forget how, but he created a fire. From that fire he forged the world.”

“That is the essence of the story, yes.” said the Witch. “Have you been told others?”

“Yes,” Tula said, “my Grandmother told me that the world always was. That one day people emerged from a hole in the ground or a cave and we have spread upon it ever since. And I once saw a man in the market square preaching that the world is an egg laid by a giant waterbird and when it hatches we will all be food for the baby bird.”

“That is one of my favorites.” said the Witch. “So. If you have been taught that Maj created the world have you also been told of Mur the Destroyer?”

“Oh yes, of course. He is to come after the final war of mankind and suck the life out of every living thing. Then he will wipe the world clean with the sacred fire. Then it all starts anew I think.” Tula was unsure about that last part.

“So, there are many different stories regarding the beginning and the end, no?” asked the Witch.

“In Arodem,” continued the red-haired woman, “they claim that the world was squeezed out the udders of a colossal she-goat. In the Red Valley it is said that the world is formed by the music played by a piper and if he ever stops playing we will all cease to be.”

Tula laughed at that one and the Witch glanced sideways at her.

“Is that any more laughable than a giant bird egg or a man forging the world on a vast fire?” asked the Witch.

“I guess not.” said Tula, “But tell me, Ma’am, which of these stories is the right one? Which is true?”

“They all are.” said the Witch as she poured the tea into a pair of mismatched and chipped cups.

“That is an excellent question.” said the Witch. “It is one I cannot answer.”

“What is the point of asking me all this anyway?” Tula asked. “What does it have to do with the wicked man and my heart? Is he planning on starting the final war so that Mur will come and draw our souls into his black lungs? Or is he going to crack the massive egg or interrupt the piper? How do all these stories help me become whole once more?”

“I have already told you, child. There is no making you whole again. Not in the way you mean. And if that man means to end the world he may well succeed. Even if he fails and you somehow convince him to return your heart there is a chance that...” she looked down at her tea as she trailed off.

“A chance that what?” asked Tula.

“There is a chance that you may no longer want it back.”