The Girl with a Bird for a Heart- Chapter VII 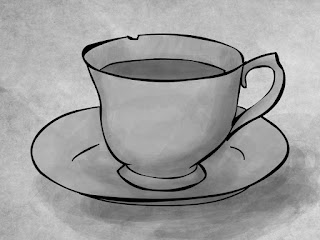 “Tell me, Tula,” said the Muck Witch, “how did you meet the man who did this to you? How did he dress and what did he look like?”

“I sold fish and oysters at the market in Skara Lys to the south. Mine is a fishing village half a day from there. My grandmother and I have sold there for years. We have our own stall. She tends to it while I carry baskets of our wares about the square.”

The Witch poured tea into a pair of mismatched cups and handed one to Tula Petek. Tula admired the cup for its sea-foam color. She held the teacup in both hands and felt its warmth as if drawing strength from it.

“On market day the man approached me. I cannot picture his face. It is as if he used some trick or glamour to make me forget it. His clothing was fine and colorful, but very unusual. He had the bearing of a nobleman, but his attire did not resemble that of the refined folk I would sometimes see in the square. He wore a coat of crimson with golden trim and a tall black hat. He had dark skin. Even darker than mine. He resembled the men from the land to the south, across the Straight of Sutrus...”

“Yes, that’s it. One of the sailors my father fished with came from there. He had skin the color of lamp oil as did the man who...who did this.” she pointed to her chest.

“So the man who stole your heart was a nobleman from Etarika?” asked the Witch. “I have known a few from that land. They have always proven to be fine and joyful people. But as with all folk, some among them are rotten I suppose.”
The girl continued, “The man said he wanted to purchase an entire basket of fish- all I had been carrying. He offered me an extra Lio coin for me if I carried the fish to his home.”

“And you did not question this?” the Witch asked her, “A strange man offering you coin to follow him home?”

The girl set her cup down and looked the Witch in the eye. “What choice would a child such as I have, Muck Witch? Had I refused the man could have struck me for such insolence. Perhaps it is different wherever you hail from, but here in Vatrus people know their place.”

The Witch turned her head away as if looking out a window, but there was none.

“He led me to a narrow street I’d never walked upon and instructed me to set the basket down. Then I looked up and he fell upon me.”

“I’m sorry.” said the Witch, “I meant not to blame you for his actions. What the man did was terrible and his fault alone.”

“I tried to scream but could not make a sound. I did not speak again until today. The worst part was the look in his eyes.”

“The wild-gaze of a madman can be horrifying.”
“No,” Tula said, “it wasn’t that. His face was full of remorse. He apologized as he cut me open. He was nearly in tears as he explained that in thirteen days the world would end. I lost my consciousness while he spoke of the ritual he would perform. I don’t even know why he was telling me. It was as if he were simply lonely and wanted someone to talk to.”

“This man has committed a horrible violent act upon you, girl.” said the Muck Witch, “He is not worthy of your empathy.”

“Thirteen days until the world ends.” said Tula, “That was five days ago. Could it be true? And if so how? And please, no more stories.”

“The man you have described sounds familiar to me.” said the Witch. “I cannot be certain, but many years ago I met a man from Kudra Kai. He was Etarikan by birth and his style of dress was similar to the man who stole your heart.”
“That means nothing.” Tula said. “There could be any number of men in the world who fit that description. Dark skin and a red jacket?”

“That is not the part that got my attention.” said the Muck Witch. “But I know of a man whose eyes are full of sorrow even as he is ending your life. They called him The Baneful Physician or The Friendly Death. You never knew which you would find when you looked upon him.”

Tula sipped her tea. It tasted bitter and strong. She held the cup in both hands once more and asked, “Who is this man? Is he a warlock?”

“Among other things, yes. He has walked the lands of Aris longer than I have. At times he has been viewed as a savior, and others a destroyer. If he is the one who harmed you then I admit I am in fear.”

Tula reached out and placed her hand over the Witch’s.