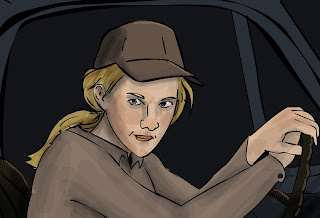 Chapter Eight
Alone in the Woods


Phel galumphed through the woods as torrents of water rained on him, lugging his bike over his shoulders through thorn and thicket.
There seemed to be some sort of heads up display in the visor built into the hood, but he couldn’t make heads or tails of it and so flipped the visor up completely. The downpour made it tough enough to see where he was going anyway.
What am I supposed to tell Charlie, he wondered. Sorry sir, but your favorite pupil has been abducted by aliens. Nothing I could do about it. What do I mean by aliens? Well, you know...people. Except from space. Well, from Earth, I guess. Or did she say Mars?  Either way. They ain’t from here. And Meiki wants to run off with them. I tried to stop her.
He thought he saw the road ahead, but when he reached it found only a clearing in the woods. There was lightning and some clattering noise followed by what sounded like shouting in the distance. Phel couldn’t make it out because of the thunder. Then came instant silence. No thunder. No shouting. Even the rain had stopped all at once.
Guess I won’t be needing this, he thought as he took off the raincoat and hung it on a branch.
Finding his way back to the road wasn’t hard once he could see again and soon Phel was headed to Gates.


Meiki landed on something hard. She stood up to find her bike beneath her- unharmed.
Meiki realized at that moment how alone she was. When Phel had discovered her she was almost relieved. It wasn’t that she wanted to stay. Her plan was still on, no matter what. Having his companionship...and meeting Rashmi and even Junko made it so that she didn’t have to travel alone. Now she missed that. Standing in the pitch black of a forest full of ravenous robot monstrosities had that effect she supposed.
Meiki lugged her bike to the road. She turned on the light and cycled as quietly as possible for an hour. By then she was more tired than she could remember ever having been. She wished she could have made a dome like Rashmi did. Of course, that may have been what attracted the ghosts in the first place. It was like they devoured it. Maybe something in the tech of it and the suits the aliens wore was appealing to them.
The thought that Rashmi and Junko were aliens was a funny one. They were aliens from the planet Earth. One of them was anyway. The other was a bona fide Martian, just like in the old Earth movies Meiki used to watch.
She couldn’t deny that the Earth people had advanced technology.  Meiki knew that the science on Earth would be amazing. Far more advanced than anything on Naya. Sure, She knew technology. She put in hours at a robotics workshop every week and knew how to fix and maintain automated farming machines and more. There were machines that could manufacture clothing, tools, and just about everything one could imagine. Rumor had it that in Newbright they were even building a skyport, but before they faded from history the humans of the old world were inventing fascinating things all the time. When she watched old videos and read stories of the time there was even reference to matter generators and clouds of picobots that could heal wounds and build anything instantly. Those things sounded like magic to Meiki.  Seeing even a glimpse of the wonders mankind had developed while she and her ancestors were digging soybeans out of the ground made her feel like a primitive seed.
Her legs were starting to feel like noodles and her eyes were collapsing shut. Meiki hadn’t considered this. She hadn’t planned on being thirty or forty kilometers from home late at night with no shelter. None of this fit her plan. If it hadn’t been for Tyson pulling up in the truck she would be in Sagan. She would have been able to find a place to sleep. Instead she was stranded on the side of the road. All because of that truck.
Headlights appeared down the road behind her. Meiki’s stomach tightened and every instinct shouted at her to run and hide, but her legs were locked in place and there was nowhere to go anyhow. She stood numbly as the truck grew closer. Her heart pummeled her ribcage as the vehicle slowed to a stop before her.
Once again it was the wrong driver- a woman she had never seen before. She wore a tight blond ponytail and a blue trucker’s uniform.
“What are you doing out in the middle of nowhere, kid?” she asked through the window.
“Uh...my name is Meiki” was all she could muster.
The passenger side door popped open. “Get in.” the woman said.
Meiki was so relieved that it wasn’t Tyson she didn’t consider for a moment that one is not supposed to accept rides from strangers. She looked down at her bike. “Should I put this in the back?”
The woman paused then said, “No. It should fit behind the seat. We’re not allowed to open the back while in transit. Well, I’m not supposed to take hitchhikers either, but I can’t leave a child on the side of the road in the dead of night. Don’t you know there’s ghosts out here?”
“I do now.”  Her bike was light and compact. She easily stowed it then climbed into the seat and shut the door.
“So, Meiki. Where are you headed?  I’m just passing by Sagan. I can drop you off there.”
“Actually...I’m going to Newbright.”
“Oh. Is that where you live? You’re pretty far from home, huh?”
“Yeah. My ma will be worried sick.”  Meiki hadn’t seen her ma in two or three years. The last time they spoke had been at the holidays. She had to make the call. It was voice only because her ma didn’t own a book with a camera. That made the stilted conversation a little less difficult at least. Most of the other kids went home for the holidays but Meiki stopped going when Charlie stopped making her. He never pestered her to offer an explanation. Meiki appreciated that.
She preferred to think of herself as an orphan. It made things easier. Somehow not having parents was better than having parents who didn’t care whether you were around or not.
“I’ll tell you what. There’s a weigh-in station right outside the city. I have to let you off before I get there or I’ll lose my job. You can ride your bike the rest of the way. It’s not far.”
“That would be great," said Meiki. “I’ve had the craziest night. I’m happy to not be stuck out in the woods anymore.”
“What happened to you, dear?”


“I...I’m actually kind of tired. Do you mind if I sleep?”  She didn’t wait for a response. Meiki was out until the sun tried its best to peer through the olive sky.