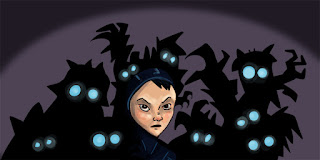 Just beyond the trees a vessel the size of a small car hovered. It bristled with floodlights and what looked to be guns poking out from much of its surface. It floated silently for several seconds before a voice came as if through a loudspeaker.
“Rashmi Kapoor!  Vi estas sub aresto pro krimoj kontraŭ la homaro. Vi ordonis resti ankoraŭ por preno..”
“I can’t understand them, Rashmi!” shouted Meiki, “What are they saying?”
Rashmi stood still with her hands in the air for several seconds. She said nothing but nodded upward at the hovercar.
A hatch opened in the underside. A young looking woman dropped down from it. She wore clothes similar to Rashmi’s except with blue circuit marks on black material. The fabric covered her entire head like a mask.
The interloper spoke some more gibberish and Rashmi dropped to her knees.
The woman strode toward Rashmi like a panther. From her belt she produced a cylinder the size of a linker. The woman began to poke at her with the small device at strategic points on her body. As she did so the glowing parts of Rashmi’s suit became dimmer.
The stranger continued to speak but Rashmi said nothing. She seemed to be looking deeper into the forest.
“Phel!” said Meiki, “We still have to find him. Those things....the ghosts.”
The masked woman said something sharp but undecipherable to Meiki then continued her work. The device seemed to be disabling Rashmi’s suit.
Meiki had never felt so helpless. Her best friend was lost in the woods and her new friend apparently being arrested.
In the brush something moved. Meiki hoped to see Phel...stumbling onto the scene. Then she noticed beaming eyes in the darkness.
The woman in black howled as a ghost leapt from the woods and onto her small frame. It tore at her uniform like the other had torn at the dome. In shock the woman spun and kicked it with colossal force.
The broken machine-thing shot across the clearing into a maple tree- it’s leg-like appendages bent at even odder angles than before. It whirred and sputtered before collapsing.
A tear ran down the woman’s outfit, revealing the flesh of her back. She suddenly appeared painfully vulnerable.
In the forest a wall of beaming eyes appeared and gazed at them with intent. A chaotic mess of dark and mangled machines crashed through the branches and bramble, descending upon the clearing.
Rashmi grabbed Meiki’s arm.
“Run!” she shouted to Meiki and dragged her in the opposite direction of the things.
They had gone at least fifty meters when Meiki looked back. She could see the ghosts did not follow them, but the uniformed woman was not so lucky.
“We have to go back for her!”  Meiki implored to Rashmi.
“What?”  she said.
“That lady!  We can’t let them eat her!”
“They probably won’t!  She’ll be ok...we need to get away from her...remember?”
Rashmi continued running, but Meiki stopped. She could never match her speed anyway.
She dashed back to the clearing. The woman held her own against the flailing mass of twisted metal and plastic that attacked her, but it was clearly a losing battle. Her vehicle hovered low to the ground and some sort of foamy substance sprayed out of the guns that covered its hull. The ghosts were slashing at it and the woman. All was a shamble of metal and plastic.
Meiki remembered her own cloak. Perhaps these creatures wouldn’t notice her with it activated.


She crept up to a tree near the battle and turned it on. The graphene fibers altered their surface impedence which would have caused Meiki to disappear to an onlooker.