The Girl with a Bird for a Heart- Chapter III 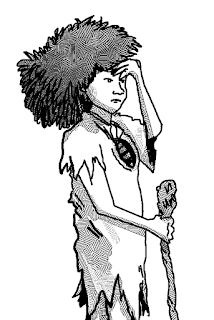 The girl approached the hut as if it were a slumbering beast that may awaken at any moment. The conical structure almost seemed to grow out of the ground itself. It stood just before the place where the dry land gave way to bog. The sun shone but the dense tree cover ensured that the domicile remained in eternal twilight. Beside it stood a small pen that housed a few blue swamp hens. The doorway stood open. To be more precise there didn’t seem to be a door at all, just an opening.

Silently she padded up to the building. The great toothless mouth of a door gave way to solid darkness. She peered into the black, expecting a wrinkled crone to stare back at her, cackling and covered in warts.

When her eyes adjusted to the dark she saw no one. Just a straw bed, an iron pot and a collection of bottles and trinkets. The girl walked around the hut and found no sign of the Muck Witch. Perhaps she had the wrong hut or maybe The Witch was out doing whatever it is that witches do. The hens looked well cared for, so the girl assumed the latter.

She found a dry stump in the clearing before the hut and decided it would be a good enough place to rest while waiting for The Witch. It was not long before someone approached.

A young man and woman walked cautiously toward the girl. They're rough clothing and lack of shoes marked them as peasants. Each had the brown skin and hair that was typical of the common people throughout Vatrus. The woman was with child.

“Muck Witch!” called the man, “My wife is not well. She carries our child. Please aid us!”

The girl stood up but did not speak. The couple drew closer and she could see that the woman leaned heavily on her husband, unable to support herself.

The girl said nothing.
“Who are you? Where is the Muck Witch? Can’t you see my wife needs help.”

Even if she could have spoken the girl would not have known what to say. She had no knowledge of healing and no idea where The Witch had gotten to.

“Well, if you cannot help me and The Witch is not present then I shall have to do it myself!” said the man as he strode to the opening of the hut.

“Husband, no.” said the woman weakly, but he did not seem to hear her and dashed inside The Witch’s home. The girl looked at the woman. Torrents of sweat washed down her brow and she breathed heavy and pained.

In seconds the man returned with an arm full of bottles.

“Maybe one of these is the medicine you need, dearest.” He held one of them out to her. It was small and opaque with a cork stopper. He put his hand over it to open the bottle before a voice from the bog interrupted him.

“I wouldn’t do that if I were you.” said the voice. “Cacobeasts are frightfully difficult to bottle up again once they are released.”

The man turned toward the bog and said, “Is it you? Witch? Show yourself! I come only requesting your aid!”

A white skinned woman stepped out into the clearing. Her red hair was long and braided. She was younger than expected, no more than thirty years. She wore an outfit of green and brown cloth and fine leather boots. Her face and clothing were perfectly clean although she had been coming from the direction of the bog.

She ignored the couple and approached the girl. “You,” she said, “have travelled a long way to come here.”

The girl did not reply.

“Ignore her.” said the man, “She is just a dumb child. My wife is ill. We need-” The Witch raised her hand to silence the man without taking her eyes off the girl.

“Let me see it.” said the Muck Witch, poking her finger toward the girl’s chest.

“Witch, I beg of you...” at this The Witch turned around. She looked at the pregnant woman for a moment and then to the collection of bottles in the man’s arm.

“The blue glass one. It is filled with dried leaves. Make a tea from them and have your wife drink every last drop. Then she should rest.”

“That’s it?” asked the man, “And that will save her and save my child?”

“There is nothing that can be done about that, man. Do as I say and your wife should live. Perhaps she will even be able to bear another child.”

“Do as I say and leave me, man. And be thankful. If you had come here any later you would have lost both child and wife.”

“Thank you.” said the woman, through exhales.

The man dropped all of the bottles save the blue one and the couple left The Witch alone with the girl.

“As I was saying, girl. Show me what you have there.”

The girl lowered her blouse enough for the witch to see the tiny iron cage. Inside it was an even tinier bird- some sort of finch. Its foreparts were a sooty grey with flecks of yellow. Its wings were darker but similarly unremarkable. The bird would have been quite plain if not for a brilliant tuft of vermillion feathers on its forehead.

“Dear creature, be not afraid.” said The Witch. “Sing for me your song.”

The bird chirped. Timidly at first but then stronger and with what sounded like joy.

The Witch clasped her hand over a delighted smile. “Yes! Dear friend! All will be well, I am certain.”

She picked a bottle from the pile the man had discarded. She unstopped it and placed the tip of her small finger inside the neck. When it came out there a dark yellow pigment coated her finger. She touched it over the girl’s throat, making a tiny amber mark.

“Now your turn, child. You may finally speak.”

“My name is Tula Petek! I was cursed by a horrible man! He stole my heart and replaced it with a bird. He took my voice!”

“Who? What man? Why did he do this thing?” asked The Muck Witch. She did not seem to doubt Tula’s fantastic story one bit.

“I do not know his name.” Tula Petek told The Witch. “He was a stranger. He said he needed my heart for a ritual. He said it was perfect for his needs. He told me that I would remain alive until the end of the world, but I would not be able to speak to warn anyone of his plan.”

“The end of the world?” asked The Witch. “Did the man mention when that was to come.”