The Girl with a Bird for a Heart Chapter II 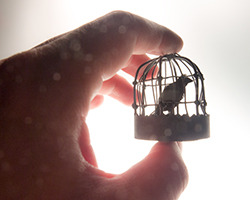 Photo Illustration by B. Zedan - www.bzedan.com

The boy reached the estate soon after his encounter with the outcast girl. He wheeled over to the great hall and spoke to the doorkeeper.
“I bring casks from Vintner Madora. They were ordered for the wedding.”
“The Vintner usually sends his son. Who are you?” asked the doorkeeper.
“I am a simple servant. The Vintner’s son is away on business in Karas and I was sent in his stead.”
“Bring down a flask so I may sample the wine, boy.” said the doorkeeper. He was an older man, but large and imposing. His mustache was long and droopy and suggested a former life in the military. He was unarmed, but carried a horn that could summon the estate’s guards in an instant.
“Sir, my instructions are to bring the casks into the great hall. They are for the wedding feast, not-”
“Do as I say child, or I shall strike you!” the man bellowed. The servant boy shut his mouth and scrambled to the back of the cart.
“You understand that breaking the seal will ruin-”
“I count seven barrels.” said the doorkeeper. I believe we can spare one.”
The boy set to the task of applying the spigot.
“I don’t have a glass for you, sir.” he said when the wine was ready to be poured.
“Use this.” the man said as he extended a small drinking cup that he carried

The doorman sniffed at the wine and took a swig. After a pause he gulped the whole cup.

“More.” he said. The boy refilled the cup and once more the man downed it.

“What do you know? You’re just a dirty child.”

“May I complete my delivery, now sir?” asked the boy.

“Very well. Be quick about it.”

The barrels were quite heavy, but the boy managed to get all of them into the hall. When he was finished he tipped his cap to the man and urged his paksi to leave upon the same road he had come. The doorman closed the door and set the lock.

When he was well away from the estate the boy looked about to see if there were any watchers. Upon finding none he held his wrist up to his face. A thick leather band with a blue stone set in it was wrapped around the wrist. The boy spoke into it.

“It is done.” he said into the stone. “Enin is inside the hall.”

Within the great hall one of the casks rattled.