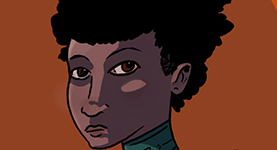 Through her window Meiki still heard the party on the rooftop. The sky drizzled a little but that didn’t seem to dull their spirits or the noise. Gates hosted a population of nothing but seeds who were content to hang out on a roof and listen to terrible music.
It wasn’t that Meiki didn’t like music. She could hear all she wanted through her book. Every song ever recorded on old Earth stored there, every movie, every story. Everything a person could want was at her fingers. Still, she wanted more. Soon she would have it. This wasn’t some pipe dream. Meiki had been planning. In two days the delivery from Sagan was coming. She had been watching the delivery every month for close to a year. Dav, the driver was clueless and predictable. She would wait until he had finished unloading the truck. He always left it wide open and would stop at the cafe for a sandwich before heading back to Sagan. When he wasn’t looking she would slip in between the crates with her invisibility cloak. When he reached Sagan she would sneak out and make her way to Newbright.
The drizzling rains evolved into a steady hissing patter.
She decided to watch an old Earth movie about a kid her age who had magic powers and went on adventures. It was her favorite movie and where she got the idea for the cloak and her plan to run away in the first place. Then she would sleep. Her opportunity to get away from this tedious life was only two days away.


On the roof Phel strummed his banjo and tried to sing a love ballad. Leggy was mindlessly whipping up a beat in the wrong tempo. They had practiced this, but Leggy was spontaneous and preferred to make the music up as he went along. It forced Phel to sing faster than appropriate and skip half of the the words. Not that it mattered, because the girl he was singing for had already disappeared down the stairs.
After the song he addressed the audience of disinterested teens who mostly milled about nowhere near the stage.
“Uh, that song was called ‘Princess of the Mist’. Umm...next one is a little more upbeat number called, ‘Tofu Hoedown’. We hope you like it.”
Phel plucked up a lively tune full of twang and Leggy’s bongo playing was less noticeable. The lyrics he sang were silly and all about dancing in the soy fields under the rain. A few of the kids actually got into it and edged up toward the stage. Some of them were even dancing.
Oh wow, this is actually happening! Thought Phel. They’re digging it! He played with more energy and his singing became clear and confident.


Sleep didn’t come easily to Meiki. The rain ramped up to a constant tap-a-tap and eventually became a hail of watery bullets against her windows. A mutter of thunder rolled through the sky.
Meiki tried to ignore it, but as she drifted off the mutter became a rumble. It seemed like she was in for one of Naya’s rare thunderstorms.
At least the party will be cut short, she thought as she pulled her pillows over her head to shut out the crackling storm. The image of that rude girl and her friends running inside cold and soaked made her smile a little inwardly.


The music reached a crescendo and Phel’s heart rate soared with it. Stray droplets of rain fell from the sky. The wetness of the night air of Naya added vitality to the moment. The dance song finished strongly and over a dozen kids had gathered around the small stage cheering and chanting for more.
Then he saw her. Ker popped out of the stairwell door onto the roof. She glided toward the stage and sat down atop an old barrel.
“Um,” said Phel, “So, uh, we only got two songs...want to hear ‘Princess of the Mist’ again?”
Phel had the audience in the palm of his hand. They were eager for more. Ker was looking up at him and he began to strum the opening notes to the ballad he had written for her.
Thunder crashed through the sky. The droplets of rain were replaced by a sudden torrent. As if the water would destroy them the kids raced to the door into the shelter of the dorms. Before Phel had realized what was happening Ker had disappeared as well. For several seconds he stood in the pouring rain unable to move.
The sky flashed brighter than daylight for a tenth of a second and the loudest thunder Phel had ever heard came right after. If he’d had the strength to look up he may have seen a bright object flaring through the night before it disappeared past the orchards. Instead he stomped down from the stage and made his way back to the dorm. His moment of stardom had come and gone.

The wind began to whip and hoot and the regular flickers of lightning transformed into brilliant startling flashes. The windows of the dorm were strong, but they rattled against the bluster as the wind frenzied and crashed against the tempered glass.
A night-shattering streak of lightning filled the sky followed immediately by a terrible peal of thunder.
Meiki ran to her window and could have sworn she saw a shooting star dart below the clouds before the coming of a horrid thunderblast and a flash past the tree line near the soy fields. The rain fell frantically for another ten minutes or so, but eventually settled back to a polite drip-drop.
After that came only silence.


Phel watched the lemon disappear past the trees. He sucked his teeth for a long while, put his hands on his hips and said, “Well, whatever. Don’t matter to me what made this mess. We don’t gotta get it fixed so we just gotta finish up here and then we have the rest of the day off.”